Former Arsenal midfielder Abou Diaby who is now recognized as a legend at the club has revealed that when he just moved to the Emirates, he intended to wear the number 2 jersey for Arsenal even though friends and family advised him against the idea. He said a lot of close relations around him were wondering why he chose to pick such a shirt number and tried to convince him that it was awkward. However, he didn’t listen. 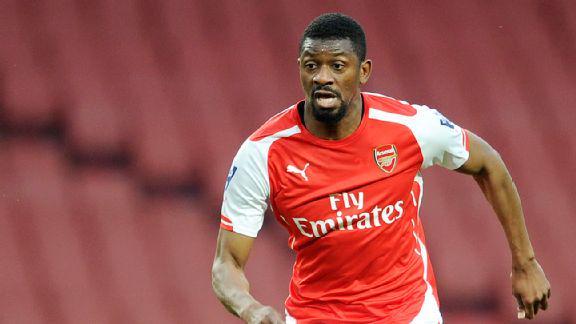 The former midfielder made the switch to Arsenal in the winter transfer window of 2006, signing from French outfit AJ Auxerre. Upon his move to Arsenal, the former midfielder requested that he should be allowed to wear the number two jersey, a squad number that is naturally worn by players who play in the right-back position. His request was granted, however, and he wore the number for a major chunk of his entire season at the Emirates.

Diaby spent a decade playing for Arsenal and wore the number 2 jersey for eight of those ten years. He would go on to make a number change, switching to the number 24 which he donned for the last two seasons he spent in the Premier League playing for Arsenal. He recently revealed in an interview which was posted on the Gunners’ official YouTube channel, insisting that it was a surprise to him that they allowed him to take the number 2 shirt. He said he had been told by a friend already that if he joined Arsenal, he should not accept that squad number.

The previous player to wear the number 2 at Arsenal was the club’s legendary defender Lee Dixon who played in 411 games for the club. Diaby would then ensure that the number maintained a legendary status before his departure.